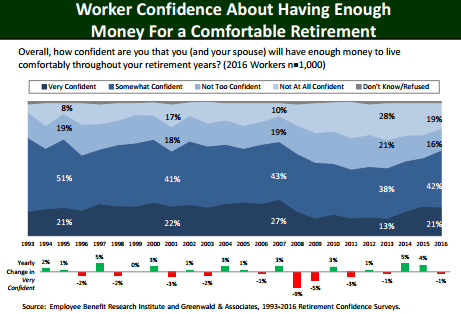 The 26th wave of the Retirement Confidence Survey (RCS), the longest-running survey of its kind in the nation, finds that American workers’ confidence in their ability to afford a comfortable retirement has maintained its increase after the record lows experienced between 2009 and 2013. However, retiree confidence in their ability to afford a comfortable retirement continued to increase in 2016. 1 While workers and/or their spouses who have a retirement plan have much larger savings and are also more likely to have taken steps to prepare for retirement, in the aggregate, only a minority of all workers appear to be taking basic steps needed to prepare for retirement. http://bit.ly/28IBkcW